Anyone else noticing big difference between projected profit and actual?

This has coincided with me increasing my bet volume from 500/month to 800+, so perhaps (while placing them quicker) I have been logging some that weren’t actually placed or vice versa. Still, it seems a lot and you would think the law of averages would have me getting more some months, if that were the reason.

Has anyone else had this issue?

I know my mis-catagorising must surely be the likely culprit.

I really fatigated after betting more than 20k bets this last year.
The graph is not helping too… because, as you say, since the “variance problem” in november-december, I am, as mostly, way lower than the EV profit.
I am thinking about reseting my log and starting again with my initial ammount of money… just to go slower again, betting low ammounts again (not a strategy, just a more relaxed way of doing things).
If the lines of real and expect profit grow alike in this new setup, it will be all cool… personally, I think it will (maybe a little lower, but between the expected to me)

Wow, 20k bets! That would fatigue alright! Do you mostly do them in bursts of 5-10 throughout the day too just? What was ‘the variance problem’? After a fast-start, my actual profit is significantly below the EV (about 60% of it) but I am hoping/assuming that as I get to your kind of numbers over the year that it rights itself.

No, usually I put 24 hours bets timeframe and do around 40. 50 per time. In the “peak”, weekends, I did 120, 130 bets. I call the “variance problem” a down period that happened between last week of october and mid december, it was then my profit got a blow down road. Before this, my EV was close and even surpassing the EV line.

My current testing stats betting 40-45 bets daily.
Expected profit and EV are not what was supposed to be but in a good way.

The EV we present right now is the expected value at the time of bet placement. This is a less useful metric, since the true odds most often decrease closer to match start (70% of the time)

Read here about the coming changes

Thank you for the reply Simon.

I wasn’t referring to EV or the closing line: my betting accounts showed £600 profit at the end of the month when the bet-log told me to expect £1200.

I expect this has been me logging wining bets that were actually removed amidst the flurry of bets I placed, though it’s happened two months in a row now, despite the extra care I have taken this month.
I was wondering if anyone else had experienced it/ had any tips to avoid it, except “be more careful with your placements”!

I had the worst day betting yesterday, in almost a year…
I hope is just normal variance, bet365 is getting weird atm.

But this is the EV.

You have only made 300 bets, variance will look much more dramatic. Read more here.

We will have to make a sticky about this I think

You are misunderstanding me, again. Or answering a different question to the one I asked.

I understand fully the concept of Expected Value and Variance. I understand the Law of Large Numbers that straightens this out over time.

The figures I have highlighted are Cumulative Profit, not Expected Value.
My cumulative profit told me that I had made £1200 last month, but when I tallied the amount in my respective bookmaker accounts it was just over £650 in profit. This was the second month in a row there was a significant disparity. I mentioned the big gap the month before with Hannah. 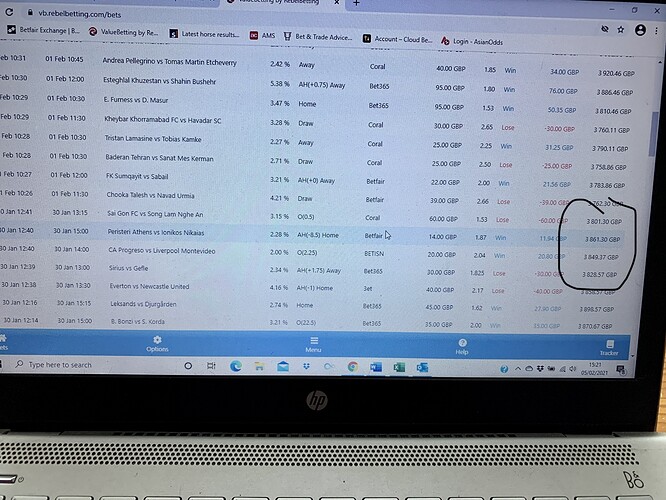 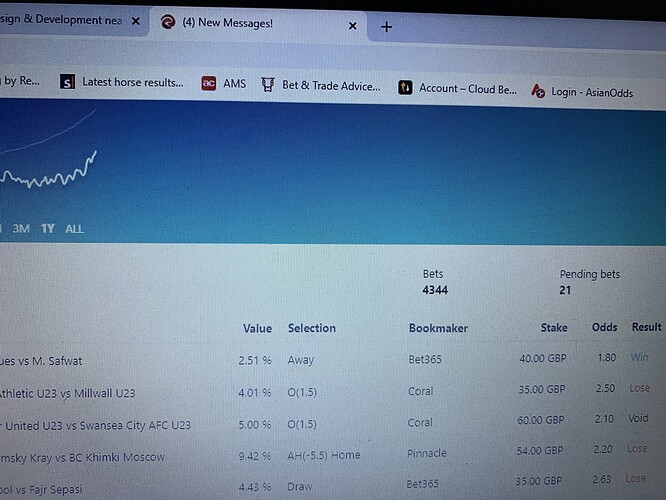 Unless I have seriously misunderstood the basics here, that has nothing to do with EV (it’s figure is at the top of the bet-log page, not where I am highlighting here) or variance.

My query/topic wasn’t a criticism of the product, which I have been very happy with (and Hannah’s customer service has been great), it was an attempt to see if anyone else had experienced this to see if I could get advice to limit it in the future.
I have taken more care with my placements this month, in case that was the issue. In future, I am only taking the cumulative profit as a guide, because I just end up getting annoyed at the end off the month if my figures don’t tally. So long as it’s in the right ball-park at the end of the year after another 10,000odd bets then I will be happy enough.

Ah, sorry for the misunderstanding!

It’s not uncommon that the logged profit differs slightly because of rounding and mistakes while logging. But this sounds like something else. There was a small number of hockey matches that got the wrong settlement last month, but all those should have been corrected.

If you find any error in your bet tracker or in the settlements, let us know. We haven’t had any other customer reporting large differences.